by James on 23rd February 2017 in Common Questions 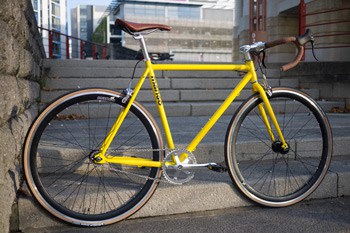 A single-speed bike is a type of bicycle that has only one gear ratio, with no shifters or derailleur hangers. While these days it’s common for “single speed” lingo to simply refer to a single speed road bike, there are in fact many types of single speed bikes—BMX bikes, track bikes, fixed road bikes, mountain bikes, jump bikes, and most young children’s bikes.

So what’s a fixed gear or fixie bike?

A fixed gear bike (or if you’re particularly hip—a “fixie”) is a type of single speed bike that doesn’t have a freewheel mechanism in the rear hub, but a secured (fixed) cog. This means that if the wheels are turning, so is the cog, the pedal cranks, and therefore your legs. A fixed gear bike is the most basic type of bike, and essentially the purest form of cycling.

For those that ride a single speed with a freewheel, there are many advantages of going with one gear—price, weight, maintenance and ease of use. There is physically less to a single speed, less moving parts that require an initial outlay and ongoing maintenance, accounting for reduced cost and weight on the frame. Riders often enjoy the simplicity of single speed bikes. If you want to go faster, you pedal faster. With a freewheel there’s really not much thought required to ride from A to B. Depending on where you ride, opting for a single speed as a commuter bike can be an easy way to integrate a workout into your day without needing to make any extra time. You want to get up that hill? Guess what—you’re going to have to get those legs moving and step-up the pace. The reward of knowing that you’ve used only your legs to overcome the hill is well worth the short-term struggle. As is the DOMS afterwards, the delayed onset muscle soreness, reassuring you that you do indeed have quad, hamstring and calf muscles, and reminding you that if you use them they’ll develop.

The single gear ratio can of course be very restrictive with certain types of riding, and inherently requires more effort to use when cycling uphill. When you’re out and out “going for it” there is a noticeable top speed limit, due to not being able to keep up with the  that will be reached much faster than a bike with multiple gears due to your pedalling rate (cadence) not being able to keep up and exceed the speed of the bike. 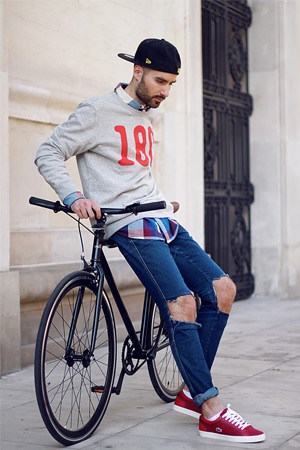 Because #MyLegsAreMyGears—why wouldn’t you? Seriously tho’, fixed gear riders can get a lot of slack from those that have never tried it. After a bit of time in the saddle of a fixed setup it’s clear why so many love it—the beauty is in the raw simplicity, your legs really are you gears, and your brakes. Resisting rotation allows a braking force to be applied.

Popular in urban environments, fixed gear bikes require a more thought when riding due to having no option but to deal with pedal revolutions. There’s no levelling out over potholes or bumps! This constant awareness that comes with riding fixed makes for a stronger connection with the bike, and a more enjoyable experience.

They can be both! All of our Original Single Speed and Point Blank bikes come equipped with “flip-flop” hubs. A flip-flop hub is threaded to take a freewheel on one side and a fixed cog and lock ring on the other, meaning you can literally flip the wheel 180 degrees to switch between riding modes. We always ship our bikes set up on the freewheel side, fitted with brakes, however the choice is there to ride either way.